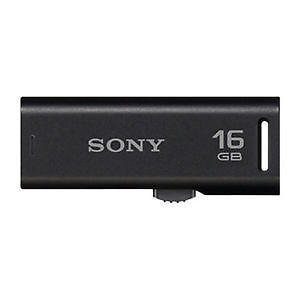 A USB flash drive is a type of portable storage device that allows you to view, transport, or store documents, music, pictures, video, and other personal files, as well as install or boot up an operating system or other software directly from the device. These particular flash drives hold 16 GB of data and are made by Sony.

What are the data transfer speeds of a flash drive?

The data transfer rate will vary based on many factors. One of these factors is the version of USB used. There are three different versions, including 1.0, 2.0, and 3.0, and each one has a larger maximum data transfer rate than the one preceding it. USB flash drives are backward compatible with older ports. However, it will only transfer data at the speed of the slower version. Another important factor is the rate at which the USB controller reads and writes data onto the flash memory. This will vary widely based on how the manufacturer designs the flash drive. Both the read speed and write speed should be written somewhere on the packing itself. This is typically conveyed as the maximum theoretical speed in megabytes per second. Real-world performance may be somewhat lower, depending on the conditions.

What is the longevity of the typical USB flash drive?

The longevity of the flash drive, meaning the number of write and erase cycles it can endure, will vary from one device to another. Some devices can endure 100,000 write cycles before the memory will start to wear. The number of read cycles, meaning the data transferred from the flash drive to another device, is almost unlimited. In addition, the USB flash drive itself is protected from physical damage by a plastic, metal, or rubber surface. You can also retract the USB connector or place a cap on it for additional protection.

What are the different types of USB connections?