Comprar ahora
About Samsung Galaxy S7 edge
eBay has provided more information about this product above and is not affiliated with or endorsed by Samsung.

*The average sold price is calculated based on "Buy It Now" items sold within the 90 day period described above (excluding shipping and handling). Each interval represents a 15 day period. There is no guarantee that items will always be listed at a price within the provided range.
Compare Similar Models 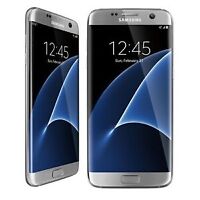 The Samsung Galaxy S7 Edge is a smartphone with touch unlocking technology available in a variety of shades. The Samsung phone is capable of basic talking and messaging along with accommodating various applications. Security technology keeps the device safe from unwanted intrusion.

The S7 Edge is 150.9 millimeters tall by 72.6 millimeters wide by 7.7 millimeters deep. It can be covered with a case and still be able to fit inside a pocket or purse.

What colors does the Samsung Galaxy S7 edge come in?

How much storage does the smartphone have?

The Android smartphone features 32GB of storage, which means room for all sorts of data. Text messages, voicemails, videos, pictures, apps, and music can all be stored on the Samsung. It can also accept MicroSD cards up with up to 200GB. The slot where you place the MicroSD card is the same one you put your SIM card in. For this reason, it would be wise to switch your phone off before inserting.

What is Samsung KNOX technology?

How do you unlock the Galaxy S7 Edge?

You can unlock the Samsung with a one-touch fingerprint sensor. Fingerprints are programmed into the smartphone by the user after purchase. Rather than punching in a pass code or number combination, the user can put their finger on the designated spot to access their Samsung. The fingerprint sensor is at the bottom of the phones front and looks like a rounded rectangle.

Yes, it can. First, access the screen you would like to take a picture of on the display. Ensure that any important details are visible. Next, hold down the home button and the power button simultaneously. The screen on the Samsung will flash to let you know that a screenshot has been captured. Typically, screenshots are automatically added to the photos application.

While the Samsung Galaxy S7 Edge was the last of these distinctive phones to receive the "Edge" monicker, the wrap-around screen and other features beloved by fans the world over continued in the S8 and S8+ models, revealing that these had become the standards for the line moving forward, rather than a special exception. New in 2018, the Samsung Galaxy S9 and S9+ continue this tradition, with smartphones, accessories and cases available at eBay.

Content provided for informational purposes only.  eBay is not affiliated with or endorsed by Samsung.