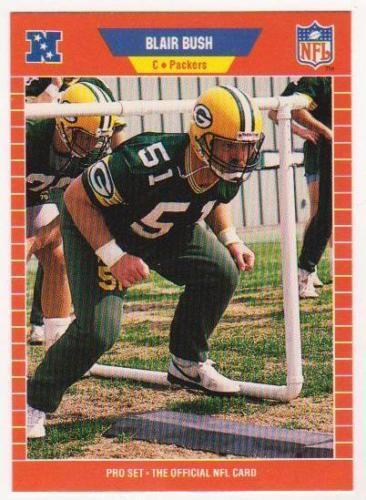 Pro football trading cards were first developed as an insert in cigarette packs in the late 1800s. As players and teams were promoted, college football was the first football league represented. It wasnt until around 1950 that pro football made its way onto the sports trading card.

The company Pro Set was founded in Dallas, Texas in 1988. The founder had previously acquired a license to produce NFL merchandise and decided to shift to other products, using officially licensed league photographs. Pro Set was the "official card of the NFL" from 1989 through 1991. The company couldnt survive when competitors flooded the market, though. It folded in 1995.

What players were represented in Pro Set decks?

The short period that Pro Set produced NFL trading cards represents just a portion of the leagues history. Those players pictured are ones who were joining the league (89 rookies) or those already on a roster. Some of the prominent players include quarterback Brett Favre during his brief time on the Atlanta Falcons, running back Barry Sanders of the Detroit Lions, and cornerback Deion Sanders. In addition to players from the Atlanta Falcons team, you can find running back Emmitt Smith from the Dallas Cowboys, and Buffalo Bills quarterback Jim Kelly. Pro Set even produced coach items. These were developed for the likes of Bill Belichick, coach of the Cleveland Browns back then, Dallas Cowboys head man Jimmy Johnson, and Jim Mora of the Indianapolis Colts.

Pro Set was also famous for releasing player rookie cards representing those players still in college. So Barry Sanders picture is of him at Oklahoma State, Deions pictures are of him at Florida State, and Troy Aikman is in his UCLA garb.

What types of Pro Set products exist for football sets?

You can find individual cards and unopened boxes of old sets. For individual cards, Pro Set offered hologram inserts of the Vince Lombardi trophy in its 1990 set. There are also autographed Pro Set cards of some of the biggest stars in the league at the time. Autographed cards are out there for both Barry and Deion Sanders, Tim Brown, and even the coaches.

Misprints can also be found and include wrong photographs, misrepresentations, incorrect information, or shifted prints. One example is the 1990 Pro Set Dexter Manley. On the back, it has a misprint of the "official photo" phrasing at the base paragraph text.

Content provided for informational purposes only. eBay is not affiliated with or endorsed by Pro Set.