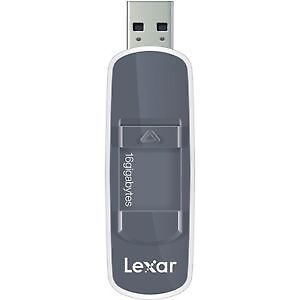 There are many uses for USB flash drives, including to transfer data from one computer to another and to simply backup important documents and store them in a secure location. The flexibility that Lexar USB flash drives offer is one of the most useful benefits because they are compatible with nearly every device on the market.

What is a flash drive?

A flash drive is a type of removable storage device that, unlike a traditional computer hard drive, does not have any moving parts. Instead, it relies on flash memory, which is stored on a computer chip inside the housing of the unit. Many come with a built-in USB connector that enables easy interfacing between the USB flash drive and virtually any computer. The USB connector is usually protected when not in use either by a removable cap that goes over the connector or a mechanism that lets it be drawn into the main body of the USB drive, where it is protected by the hard shell along with the other internal components.

USB 3.0 and USB 2.0 are two different types of USB ports. The only difference between them is the speed that they support for reading and writing data. USB 3.0 makes use of improved technology to transfer data significantly faster than USB 2.0 is able to achieve. Fortunately, when it comes to the devices that are plugged into the ports, it makes no difference whether they are 2.0 or 3.0 ports. For instance, if you were to plug a USB 3.0 flash drive into a USB 2.0 port, it would still be able to function effectively; the only caveat is that the speed of the USB drive might not be able to fully reach the high end of USB 3.0 speeds as long as it is plugged into a 2.0 port. The same goes for a USB 2.0 drive in a USB 3.0 port; the speed would be capped at the lower of the two maximum speeds.

Which file system should you use for a flash drive?

There are two primary systems that are used in USB drives, which are NTFS and FAT32.

Content provided for informational purposes only. eBay is not affiliated with or endorsed by Lexar.