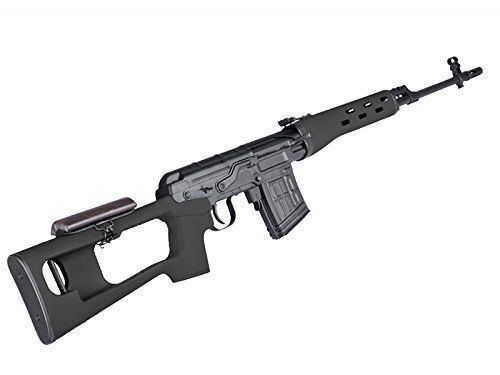 Electric airsoft rifles are weapons meant to replicate designs of standard gun types, such as the M4 and AK47, but these electric rifles shoot very small BB projectiles. These airsoft guns can be used for many different purposes, and can be used by people in competitive games against other teams as well as in use by clubs for target practice or for historical reenactments.

How do electric airsoft guns work?

One of the main types of airsoft guns are electric rifles, which use a standard spring-loaded piston pump but with portable rechargeable battery packs as opposed to having to manually operate it. These battery packs provide power to an electric motor that transmits energy to the portion of the gun that compresses the pump spring to the point where the release of the spring causes the projectiles inside to propel forward. Among these electric rifles, it is possible to choose an airsoft gun that shoots at selective fire rates, including automatic, semi-automatic, and three-round bursts, providing you with variety in the type of gun that you select. Depending on the exact model you choose, these weapons can shoot at a velocity of anywhere from 150 to 650 feet per second. It is also possible to select models that will fire up to 1,500 pellets every minute.

What are the different airsoft gun refinements available?

These electric airsoft guns come in a wide range of different refinements and series from which you can select. For instance, the most common types of electric airsoft weapons are black M4 carbines, which are light assault rifles that can fire at several different rates, including automatic and semi-automatic modes. Other airsoft gun refinements that are available include G36, M16, MP5, MP7, P90, and AK47 models, each of which has its own feature set. Most of these electric airsoft rifles, such as the M4, come with a variety of features that are designed to make the device appear like the real thing. Depending on the model you choose, some of the main features include the provision of solid mounting surfaces, gearboxes that feature full metal construction, a ball-bearing spring guide that helps to reduce tension between each shot, and a flip-up sight system that can be used for targets at long range.

What type of ammunition can be used with these guns?

Although airsoft guns only use BBs as ammunition, there are numerous types of BBs that can be used in an electric airsoft rifle. These tiny pellets are non-metallic and are usually made from plastic or specific biodegradable resin materials. These projectiles are able to resist corrosion and shoot hard enough to make marks on paper or sheet targets at a range. In most instances, these airsoft pellets vary from .12 to .30 grams although the weight of the ammunition is the only notable difference between the various BB types. With most airsoft rifles, the magazines attached to the gun will typically accommodate up to 300 pellets in one clip.