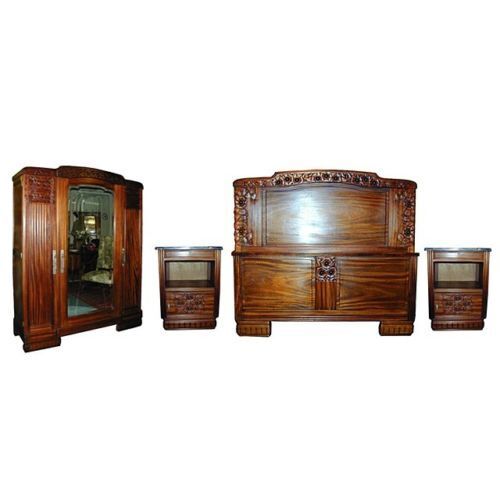 At the start of the 20th century, many American homes contained natural wood and functional bedroom decor with simple lines and sparse varnishes as the country was caught up in the Arts and Crafts movement. Even 50 years later, many rooms feature bold Art Deco designs. During the intervening years, furniture has also gone through the Art Nouveau movement.

What was the Arts and Crafts movement?

The Arts and Crafts movement started about 1880 and lasted through the first decade of the 20th century. Primarily, oak was used to build sets during the Arts and Crafts movement. Many luxury suites were made by the Stickley Brothers, who imported craftsmen from Turkey, Japan, and Russia to make elaborate copper hardware. While early pieces had thin legs left over from the American Empire period, their size continued to grow throughout the decade. Contrasting wood or crushed abalone shell inlays adorned many headboards and even bed frames.

What are differences between British and American Art Nouveau furniture?

While those in Great Britain were paying elaborate commissions for handmade sets, Americans were busy buying mass-produced painted furniture. Regardless, a premium was placed on beds with a high gloss paint and elongated curves. Many pieces had elaborate carvings and inlays inspired by nature or the female form with long-flowing hair. Many craftsmen drew inspiration from Victor Horta, who believed that all bedroom set pieces must work together to create a sense of harmony. In addition, Tiffany lamps were found in many master suites. Many beds, dressers, and chests of drawers featured hand-painted flowers and other motifs.

Who were some notable Art Deco furniture designers?

There were numerous designers who left their mark on Art Deco bedroom designs including:

The process of creating a vintage-style bedroom is not complex. Designers start by: